Every year, during the breeding season, I am lucky to have great spotted woodpeckers returning to my family’s garden to feed on peanuts from our bird feeders.

In my opinion, great spotted woodpeckers are beautiful birds with colourful markings and a distinct call.

In particular, I love to watch the birds fly to our garden in pairs from our nearby wood, and as the season progresses, seeing one of the pair come less and less, leading to eventually seeing them both return together with their chicks to feed them from the feeders.

This year I saw a couple of different pairs using our feeders, and a number of chicks being bred as well. I loved being able to watch the birds from my window, seeing a parent collecting peanuts from the feeder and flying to the chick hiding at the edge of the garden, before being fed.

Nearer the end of the season, with chicks dispersing, the parents began coming less and less, until the same older chick was seen coming to feed in our garden daily.

Last week i took some photos of the youngster on two consecutive days and the second day was the last time i saw a great spotted woodpecker feeding in our garden. 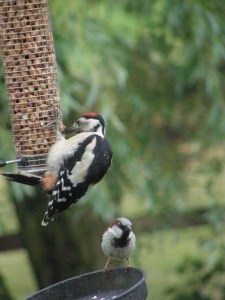 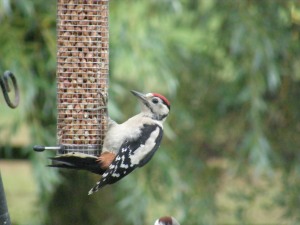 In reference to my earlier blog post ‘Breeding barn owls’, I have continued to monitor my barn owl nest box in which we believe a pair of barn owls to be using.

Now i can update you all on what has happened to our pair.

The weekend after i did a barn owl box stake out (see ‘Breeding barn owls’), we had really bad rainy weather, and we did not see the pair hunting during this time. As a result we came to the conclusion that they were not able to find an adequate amount of food for themselves during this time. This gave us the inkling that the pair may have abandoned their breeding attempt for this year.

For a time we continued to see the pair hunting over the fields during evenings, until a couple of weeks later we stopped seeing them. I then found a suspicious amount of barred white feathers in a wood within the vicinity the barn owls hunt in. I believe them to be from one of our barn owls, and the amount of feathers found make me think that one of the pair may have been attacked.

Our thoughts about our nest box were confirmed when we decided to check it, and found two abandoned barn owl eggs.

We have not seen two birds again, but at the end of last week, we saw one barn owl hunting on our farm once again.