When I arrived back home a week ago from my first year of uni, I was told that my friend had seen a pair of barn owls on my home farm. These owls were seen to be using a barn owl box that had been put up by my Dad a couple of months ago. As barn owls had been seen by my family and myself on our dairy farm before, this year my Dad had decided he wanted to give them a helping hand, in the hope that they would use our box to breed. The news that it was possibly being used already, excited me. Consequently, I wanted to see for myself that the box was actually in use, and planned a barn owl box stake out the following evening.

I headed to where the box was situated at 20:45 and positioned myself in a cubicle barn across from the box, where I could look through a gap up at the box and surrounding possible perches. Patiently I waited, with no sign of either adult birds, though I could hear an individual screeching noise coming from the box, which made me aware that an adult bird was present. 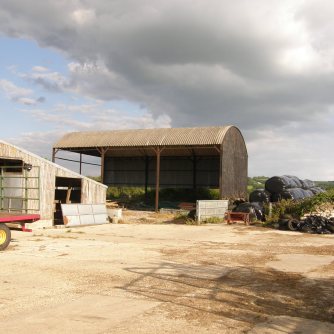 After a period of only blackbirds, magpies and pheasants being heard, I heard a screech come from the nest box, followed by an adult female barn owl flying out of the entrance hole of the box, and landing on a metal roof truss a couple of metres from the box. After a few minutes of the female scoping her surroundings, she flew a couple of metres further, perching on a second roof truss. There she preened her feathers, stretched and defecated, before returning back to the nest box.

It was amazing to actually got to see the female up close, closer than I had ever seen one before. From this sighting, I could deduce that the female was going through the processes of incubation, though I cannot say at what point the female started sitting. On my walk back home from the barn, I disturbed the male who had been sat on a bank of grass not too far off from the barn.

I am looking forward to keeping an eye on the pairs’ process, and a family friend who is a licensed bird ringer is hoping to make a visit to us at the end of June to check the barn owl box. If there are chicks and they are big enough, he is hoping ring them. I cannot wait!